What occurs in a museum space is an exquisitely crafted bid for the viewers’ focus. Bradley Stevens’ quiet but surprisingly dramatic oil paintings now on view through February 24 at Warm Springs Gallery bring us into the somber-toned chambers of the National Gallery in Washington D.C., the Met, and other august American museum spaces. He reveals that he learned to paint by encountering the works of Cezanne, Sargent, Heade, Gifford and others while visiting these museums and that most of the works in these 11 tableaux were chosen for the influence they have had on his life in art. 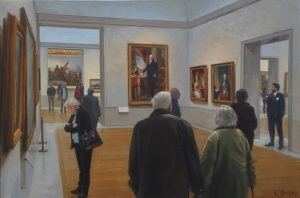 But the most captivating information in these works is what hangs in the cavernous air in these rooms and in the psychological space between the paintings and the onlookers. The stance of the viewer inside a museum can be as nuanced as the subject viewed. Once inside, everyone is completely abandoned to his own peregrinations, and a process is set in motion in which the architecture, the art, and the public must encounter one another. It is this wandering on foot that Stevens has captured, along with the vacillations of attention as people stand, study, get studied, walk toward, stop, read and move about.

In the foreground of one painting is the back of a white-haired man whose slight lift of one shoulder suggests an attitude of uncertainty as he enters the space; in another, a young man’s back seems to tighten in defiance as he stares at a Cezanne; a woman stands off balance on one foot with her long hair still catching up to her abrupt halt before a painting of a gigantic angel looking down at her, the bottom fringe of her hair an echo of the angel’s wing. She’s in a hurry. The guard’s attention, which has been paid for, is more an angry swivel as he leans against the wall straddling two rooms. And the older woman in profile is smiling, registering up close some text as if it were a familiar child.

Samuel Morse, an American artist visiting Paris in the 19th century, with a similar project, completed his chef-d’oeuvre of the Louvre’s great hall in the 1830’s. In his painting, he depicts every great painting that influenced him choc-o-bloc covering every inch of the walls. He wanted America to see what he had seen, and he peopled the floor of this great room with himself, members of his family, and a few notable others in the presence of art, making art. Didactic at its core, the painting instructs us about what to admire and underscores the importance of art’s purpose. Stevens, too, puts himself in some of his paintings; in one instance, he captures his own long-neck, nose-to-canvas stare that usually causes a guard to step away from the wall.

But these works are not meant to knock your socks off about the glory of art, though Stevens painstakingly, faithfully, and sensitively tends to miniature reproductions of great works of art. These are three-dimensional portraits of a phenomenon: how do we absorb those works?