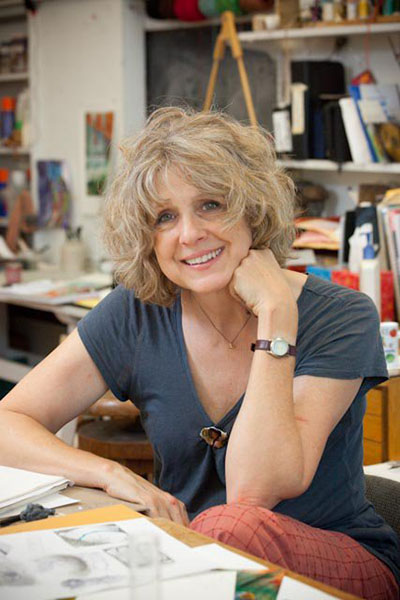 Rosamond Casey’s work is represented in the permanent collections of the National Gallery of Art, the Melbert Cary Collection at Rochester Institute of Technology, the Library of Congress, numerous University collections, and the Jack Ginsberg Collection in Johannesburg, South Africa.

She has exhibited her painting, book art, and gallery installations widely. Her solo exhibitions include the Burroughs Chapin Art Museum, SC; Triangle Gallery, DC; The Ward Center for Contemporary Art, The Fralin Art Museum, VA; Chroma Projects Art Laboratory, VA; McGuffey Art Center, VA; Her work has been included in group exhibitions at the National Museum for Women in the Arts and the Corcoran Gallery of Art, Washington DC and published in national journals such as Virginia Quarterly Review, Calligraphy Review, Art Directions magazine and Archipelago.

Casey has taught a series of seminars and courses she has designed based on her own explorations in art and her research on the evolution of early written forms and the use of cross-modal associations in art making. She lives and works in Charlottesville Virginia.

My way into a project is to examine an idea that seems opaque to me, fracture it, dislocate its meaning and render it slack. ‘Slack’ is the condition of an object lying spread out to be examined. In order to grasp the meaning of a thing it has to be taken apart visually and conceptually, emptied of its regular blood flow, its habit of being, the way it’s used to being seen. As the observer of the thing, I have to come to the project in a similar condition, a little bit empty and dumb. To understand the weight, proportions, and contours of a thing I have to turn it around in my hands, consider the scope of its cultural reach, recall my own primal sensory reactions to the look, smell, and feel of it, and figure out the tools I need.

These encounters began with an early interest in the relationship between text and the physicality of letter forms. Letters confronted me early not just as code, but as ballet. Playing with them on a page released them from their usual task and recast them as manipulable forms that would carry me through a career-long examination of abstract marks and symbols, language and psychology, and ultimately the human figure.

Through the nineties I built an array of odd-looking tools that could be manipulated at the point of contact with a smooth substrate to create an effect of three-dimensional calligraphic line in motion. It was in this series of glass and wood constructed paintings that the strict authority of written forms gave way to the physicality of line to tell a purely kinetic story.

These faceted works got me interested in the hand-made structure of books (link?) whose complex enclosures paradoxically became a sort of meeting place to collaborate with others—living, dead and imaginary.

Mapping the Dark: A Museum of Ambient Disorders is a five-year-in-the-making installation project mining the interior lives of ten imagined characters each of whom forges a precious object as a visual response to his or her condition. Their private mark becomes a tool with which to stabilize, suppress, or activate an inner state.

Men in Suits: A Day on the Hill ultimately became an investigation through snapshots furtively captured during an outing on Capitol Hill. These enlarged images formed the basis for a sequence of composite mixed-media panels that track and collapse power structures in Washington DC, exposing failures of will that bring on tragic compromise.

A more recent investigation into oil painting began with an examination of computer wires under our desks and evolved into a parable of 12 figurative oil paintings called Tablet & Cloud: Pilgrims in Cyberspace. This series was followed by an installation of paintings in 2019, In Those Days There Was No River Here, which sought to expose a hidden mental state among future refugees of climate change. Working Below Sea Level, a 2021 exhibit, imagines a time after the waters have risen when we will have to reimagine ourselves in altered environments.